﻿﻿The Hidden Shortcut To Financial Freedom

My name is Brad Weinman and I'm the co-founder of M4 Research, which is an independent financial publisher, and over the last several years, we've pretty much become the go-to source for all things related to making, managing and multiplying money in uncommon ways.

And what I want to talk to you about in this video is one of the most powerful yet hidden financial shortcuts that you can use to increase your income and position yourself to be able to retire early and wealthy... and, I say hidden because it's not something that we're taught in school.

In fact, our educational system does everything to discourage us from using it... you know so many people these days are rushing back to school so they can acquire more knowledge, so they can make more money... but the problem is, school teaches you nothing about money.

Instead, it teaches you how to be dependent on an employer for a paycheck where your taxes are always gonna be higher... which means that if you save money you're taxed, if you work harder you're taxed, and if you put your money in a retirement plan you're taxed.

That's not very intelligent, yet that's what they teach us to do in school.

In any case, our society can be divided into two basic groups of people: those who use money and those in which money uses them.

And if you want to be part of the first group - which I'm hoping you are if you're watching this video - then you have to take a different path than the 95% crowd that ends up either retiring broke or like this guy who just can’t afford to retire...

The reality is, financial freedom is only possible when you can divorce your time from what you earn... and I’m gonna explain how to do that in a minute...

But before we get to that, let me start off with a simple definition of what income is (and this can apply to both self-employed folks as well as employees)...

Now, what do most people do when they want to increase their income?

Well for one, they increase their time.

The other way people try to increase their income is by increasing their rates.

And this is the main reason we're told to go to school and get a good education so we can get a good paying job.

So some people try to get promoted, some pursue better careers, and others go on to earn an MBA or PhD thinking that that’s going to put more money in their pockets.

And that can certainly work, but there's a major drawback with these strategies... because all they do is simply increase the rates.

I'm not saying there’s anything wrong with this type of linear thinking, but what I am saying is that there's a better and smarter way to increase your income that isn't taught in school and isn’t dependent on you trading your time for someone else’s dollars.

So let's talk about the difference...

Again, the first definition of income is based on your hourly rate multiplied by your time...

But a more enlightened definition of income is this...

Leverage is a term that's often referred to in financial books, but it basically means doing a lot with a little to gain maximum advantage.

Here's what Robert Kiyosaki, author the Rich Dad, Poor Dad series has to say about leverage...

He says that "Leverage is the reason some people become rich and others do not become rich."

I mean, think about it... the most successful people in life know how to leverage their time and money... and having this specialized knowledge is what separates the wealthy from the poor and middle class.

Now... there are basically 2 main types of leverage that you can capitalize on...

... and you might be familiar with these, but when it comes to increasing your income, we find that most people that are new to our community are only utilizing maybe one of these forms of leverage... but in a lot of cases, none at all.

So let me run through these real quick to make sure that you're clear about what I'm actually referring to here, starting with people leverage...

Let's face it, we all have the same 24 hours in a day, but we can get a lot more accomplished by leveraging our time through the efforts of others... and that also includes leveraging other people’s talents, skills, and experience.

A perfect example of this is a business owner who leverages their time through their employees...

... and this obviously gives them the ability to multiply their efforts and increase their income without necessarily increasing the amount of time they invest to grow their business.

The thing is, not everyone's cut out to be an entrepreneur.

Not only that, but no matter how successful you become, as a business owner, YOU are still part of the equation.

So even though growing a business is a good step in the right direction (and one that my team and I wholeheartedly endorse), it doesn’t incorporate the most leveraged step... which is to use money (not work) to make more money.

And that leads us to financial leverage... which is all about using money as a tool. 'Cause here's the thing, the wealthy don't work for money... they invest in assets. And assets produce cash flow, not a paycheck.

Now, in the context of what we're talking about here, it's all about converting your available cash or even OPM (using other people's money) into income-producing assets that will continue to pay you without working.

For example, let's take a look at investors...

They leverage their money by investing in assets that produce passive cash flow. Of course, one of the most popular traditional assets to invest is rental properties.

And on average, the ROI for traditional real estate investments like these are gonna range somewhere in the neighborhood of about 5 to 8% per year after expenses... and that’s not counting the fact that inflation’s gonna eat up a few points here and there as well.

So... your net ROI on traditional real estate may only be about 2 or 3% a year when all is said and done.

But what most people don't know is that there's actually a whole universe of passive money-growing opportunities out there that are producing returns of 20, 40 and even 100%+ per year on complete autopilot... and by the way, if those kinds of passive returns are of interest to you, then I'll tell you how you can get more information on that in a minute.

But, just talking from personal experience... it's an amazing feeling when you've got thousands of dollars automatically flowing in to your bank account every single month whether you get up out of bed in the morning or not...

... you know, that's something that a lot of people dream about, but it's never gonna happen unless they tap into the right types of financial vehicles that are specifically created for that purpose.

Again, true financial freedom is created when you can divorce your time from what you earn.

So if you're working for someone else, you don't have leveraged income because your employer is buying your time in order to build their dreams... and since time = life, you're literally selling your life to someone else.

But here's the thing... at the end of the day, it really doesn't matter whether you’ve got a job, or you're self-employed... because you're either using leverage to your advantage, or you're being leveraged and leaving money on the table. It's just that simple.

It all boils down to putting your money to work for you instead of you working for your money.

Now you might be wondering "Ok Brad, I get what you’re sayin' but exactly HOW do I create leveraged income and where do I start?"...

... so what my team and I have gone ahead and done is we've written an insider report called The Renegade Money Guide that actually outlines the entire process in much more detail than we've gone over in this video. 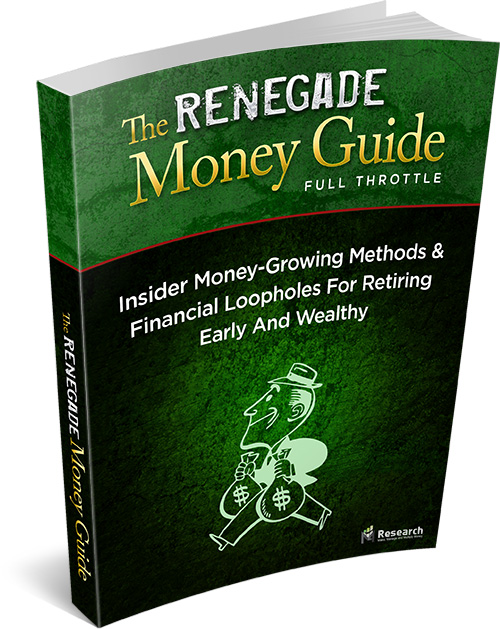 And you'll notice right down below this video is a little blue link where you can go check out that report, that'll not only show to how to start creating leveraged income, but it's also going to show you how to take this concept of leveraging money to the next level and kick it into high gear.

This exclusive guide contains over three dozen actionable ideas and proven tactics of the wealthy that can literally save you thousands of dollars on fees, taxes, travel expenses, education costs, and a whole bunch more.

So with that being said, I hope you enjoyed this video... and if you want to check our insider report, just click on either of the blue links below and see what it's all about.

If you want to get right into the RMG 2.0 - CLICK HERE